Home » Blog » Household Enemies » Mould & Mildew: What They Are and How to Fight Them

Mould & Mildew: What They Are and How to Fight Them

Posted by Go Cleaners London on December 9, 2016 in Household Enemies

You know that both mould and mildew smell funky, leave unsightly blobs on your walls, and both probably mean one and the same thing. But is their presence in your home really as harmful as people make us to believe? Many studies and countless blogs suggest that this is the case.

And, for better or worse (we boldly believe it’s the former), this blog post will not share a different opinion. Okay, so can somebody explain what is so threatening about these oddly coloured ecosystems? We’re glad you asked! Allow us to walk you through the facts.

Mould & Mildew in the Grand Scheme of Things

Other than making homeowners’ life around the globe a tad more complicated, these lichen-like guests actually serve a practical purpose. Comprised of legions of microscopic organisms that contain digestive enzymes, their job is to decompose dead organic matter, such as fruits, mushrooms, or deceased animals. Besides aiding nature’s perpetual recycling program, several strains of mould are also utilised in food production.

For instance, the Kōji moulds are used to ferment a special wheat mixture that is then used to make soy sauce. On the other hand, the Penicillium mould is the “secret” ingredient to the famous (and slightly controversial) blue cheeses and is also the driving force behind the lifesaving penicillin, invented by Alexander Fleming in 1928. But once they enter our homes, these otherwise benevolent growths start causing all sorts of trouble. We are also well aware of some of the places they tend to grow.

A Closer Look at the Live Coat of Paint – Which Is Which?

These two members of the fungi family may look identical to the untrained eye, but there are several key differences that separate them apart.

Let’s take mould, for example. Often fuzzy or mushy in appearance, this substance often comes in shades of black, brown, white, and green.

Mould is known to dwell primarily in moist environments and is able to quickly spread around the house, dishing out significant structural damage in a short amount of time. If left to thrive, it can also lead to bad allergies and skin rashes, along with other serious health complications.

So, what do we know about mildew?

To put it simply, it’s mould’s much younger and inexperienced brother. With the exception of orange, mildew shares the same colour preferences as its older brother also uses airborne spores to reproduce, and loves humidity just as much.

Unlike mould, however, its presence becomes apparent much sooner and is, therefore, easier to spot. Mildew is also more “dusty” in appearance, spreads in much smaller patches and cannot really damage your home, but can still incite a strong headache or the occasional cough.

What Are the Tell-tale Signs of a Mould Infestation?

Mould is highly unpretentious – just give it a damp area in the house and some organic material and watch it bear fruit. Most of the mould varieties are noticeable to the casual observer and usually discolour the surfaces they cover. Others, however, are hidden under home furniture and appliances or behind walls and may come in more subtle colours. To find out if your wall or ceiling has been affected by mould, simply prod its surface a few times. If the paint starts to crumble and fall apart, then it’s quite likely that you have a mould infestation on your hands.

Another telling sign that mould has infiltrated your home is the typical musty odour that goes along with it. Usually, this growth is a common sight to spot in your kitchen, bathroom, or basement as a result of excess moisture or improper ventilation. However, the persistent fungi can be found in literally any corner of your home that is even remotely connected to organic material, for example, a leaking roof, your carpet’s backing, an old book, or even everyday household dust. A good rule of thumb is this – where there is moisture, there is always mould.

The Negatives of Keeping the Fungi Duo Around 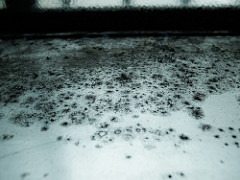 Now that you know what mould and mildew are and where to find them, it’s time to learn why you should get rid of them as soon as possible. These fungi can develop their colonies in as little as 24 hours and have an insatiable appetite. Their first business would be to sink their microscopic teeth into your home’s drywall, carpet, or wooden ceiling beams, causing rapid deterioration. Under the right conditions, for instance after a flood, mould can even use copper, steel, and other metals as carriers to then spread its spores to the organic surfaces nearby!

Mould and mildew can also have a negative impact on your personal health. As mentioned above, their preferred mode of transportation is through small spores that, with the help of your HVAC system, can quickly spread to every corner of your home. Inhaling these spores will lead to unpleasant symptoms, such as a runny nose, a sore throat, or skin rashes. To more mould-sensitive people, these invisible skydivers can cause fatigue, nausea, muscle pain, eye irritation, a long list of respiratory issues and, in some extremely rare instances – brain damage.

To defeat the fungi, you must first locate and eliminate the source of dampness. If your washing machine is leaking – fix it. If water is accumulating behind your basement walls – install a water pump. Once water is no longer present, put on a breathing mask, goggles, a pair of gloves, and use a solution of bleach and water (quarter cup of each) to generously spray all affected areas, then wait for 20 minutes and repeat. Finally, use a borax-based cleaning product (do not rinse it) and give the area a good scrub, then open all windows to dry the room out. In case your problem persists, your best bet is to leave your mould infestation to a certified professional.

The best way to stop mould and mildew from developing within your property is, of course, by preventing this from ever happening. A few simple things you could do is to run your air conditioner as frequently as possible, use the bathroom extractor fan after taking a shower, and to dry off carpets, clothing, or furniture as soon as they become soggy. Consistent and thorough wiping of all surfaces (air ducts included) with a sponge and pure vinegar will also help kill off all spores before they have a chance to establish a colony. Finally, you can get a dehumidifier to keep the humidity levels in your home in the recommended range between 30% and 50%.

We realise that keeping your home in tip-top shape can often be too much of an effort. In case your hands are frequently filled with other responsibilities (and let’s face it, we’re probably right), check out our regular domestic cleaning option  or the know-how of professional end of tenancy cleaners and spend your valuable free time where it matters most.

Mould and mildew are only ones of the many household enemies around you. See all posts related: